In addition to the air that is essential for life, we also inhale a lot of dust particles, as well as potential pathogens, with every breath. These particles are already trapped in the nose and airways. The lining cell layer of the airways has glandular cells that produce a film of mucus. Inhaled particles up to 10 µm in diameter stick to this film. The lining cell layer, which is also called ciliated epithelium, has above all many cilia-bearing cells. The coordinated, rhythmic beating of these cilia transports the mucus film towards the pharynx and thus removes the dirt particles, i.e. they are finally swallowed.

A ciliated epithelial cell has several hundred of these cilia. The cilium diameter is about 250nm and the length is 5-10µm. Respiratory cilia have a beating frequency between 8-12Hz. The cilia beat leads to a transport of the mucus film in the nose of about 6mm/min and in the lungs of up to 20mm/min from both locations towards the throat. 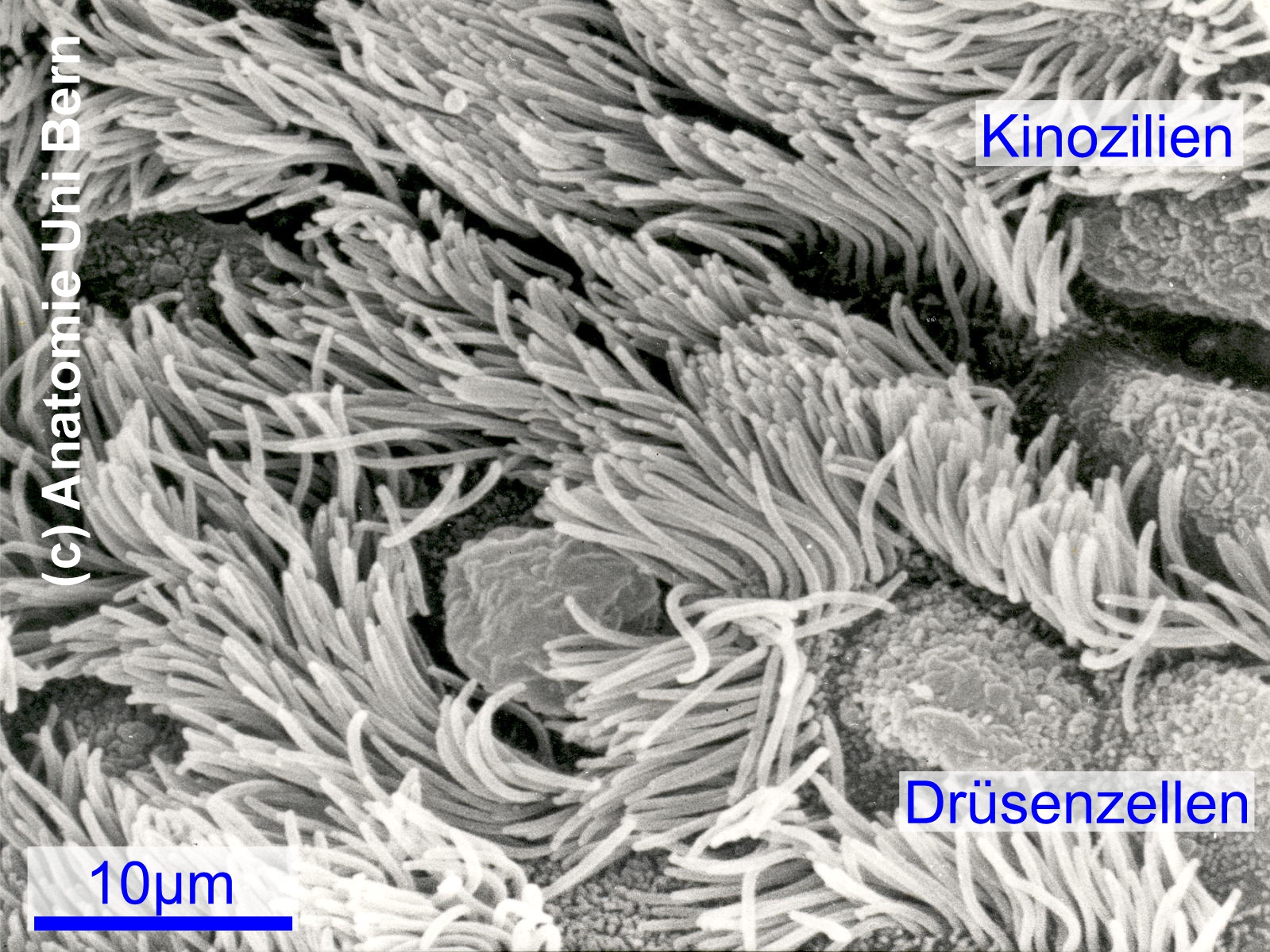 The electron microscopic ultrastructure of cilia reveals a fascinating "wheel-spoke" pattern on cross-sections (top right figure). Around a central pair of tubules, 9 pairs of aggregated tubules are arranged in a strictly organized manner in the periphery. These outer tubule "doublets" consist of a complete A tubule (light blue in the figure above) and an incomplete, flanged B tubule (dark blue). The outer and inner dynein arms are located on the A-tubule.

The dynein arms interact dynamically with the B microtubules of the neighboring pair under energy consumption, resulting in rhythmic beating of the kinocilia.

Between the central pair and the outer doublets, as well as between the individual doublets, there are various proteins that serve to regulate and give direction to the ciliary beat: Central Complex with Hydin, Radial Spokes, N-DRC (Nexin-Dynein Regulatory Complex), Nexin link, et al.

In PCD patients, proteins of the dynein family or (somewhat less frequently) other regulatory proteins are genetically miscoded, which leads to an impairment or complete cessation of motility. As a consequence, the mucociliary clearing mechanism, especially in the airways, is impaired, which essentially explains the clinical symptoms (see Clinics).